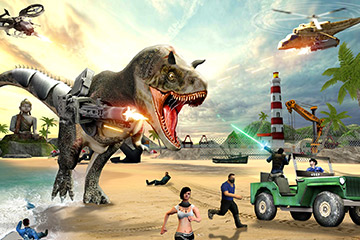 Play the chasing game with 3D dinos and have fun. This Dino Game is an episodic graphic adventure game based on the life of 3D Dinos with real-time effects in throwing, eating & shooting features. It has action types of equipment used in the gameplay like a gun or two, or defy nature by breathing fire! Experience a brand new adventure with prehistoric 3D dinos in Dino-Trex simulator.
Dino T-Rex Attack In City is the most entertaining dinosaur attack game. The 3d environment will lead you to the wild world of t-rex simulation gameplay with modifies 3D Dino. Each Dino is modified with different weapons to harm the humans. They don’t go easy on you!!!

– Use the weapons to aim the targets & kill them.
– Tasks will be given based on each level
– Upgrade the dinos based on your levels

Enjoy the 3D life of Dino & Live the life of Jurassic Dino’s. Attack, eat and survive. !!!! Hurrey, get ready to be a Dino & destroy to survive.