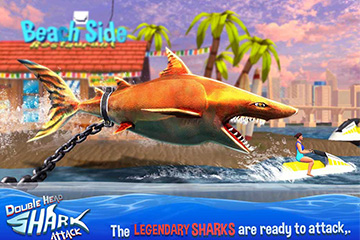 We are in an age where storytelling in games can take so many approaches. Some take the literal and others the intellectual approach. The games that take the intellectual approach have to really define its emotions through visuals, graphics & sounds, and only a handful of idealogic concept games to work out the mission. The game starts as from exploring a happy island and swimming deep into the oceans for fun and entertainment to explore the truths, reality beyond underwater.

However we found some interesting reality about sea creature mainly the Sharks and their survival. The journey began months ago managing, collecting bits and pieces in the project. The ideas the concepts started upgrading adding many new features, costumes and come out with a Huge Project “DOUBLE HEAD SHARK ATTACK”. It was hard in the beginning to think how get our self explored and get engaged in the dream we dreamt. We came up with a creative mixed combinational concept which motivated us to live a life with the sharks and make it as entertained sharks under water.

We have planned a short adventure game of the wild fierce creatures mainly underwater to recreate the wonderful game “DOUBLE HEAD SHARK ATTACK”. They are the most silent creatures yet killers which hunt down everything they get. We have the game’s protagonist the main the “Double Head Sharks”. We are illustrating a game that is a mix of cell shaded scenarios underwater especially The Terrific Creature “The Sharks”. The game is based on how sharks survive underwater by hunting or surviving itself on humans.

Aside from the main story, you’ll be able to engage in a bunch of side mission like creating your own targets. These missions in the game are scored according to their difficulty level and this is something really important to the game. If you need more coins to complete the levels you can purchase. You can play any mission given at any point in time and as this game is created in the world around in different zones for the users to take look around the globe. We also have a puzzle-based adventure game where learning of new creatures will excite you!!!

– Explore & hunt other multiplayer.
– Search and eat words in the ocean to complete the target.
– This is the unique multiplayer feature with the brainy quiz to unlock your sharks along with your IQ levels.
Let’s see how sharp you are & how well you compete to survive underwater with your friends.